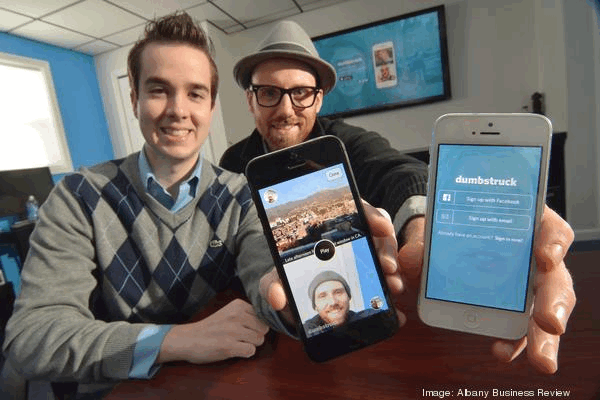 Reprinted from the Albany Business Review

From left Michael Tanski and Peter Allegretti are co-founders of Doctored Apps, which developed the Dumbstruck photo and message-sharing app.

The app allows users to capture reactions to photos and video messages shared with friends. We’ve written about their locally based creators in the past.

The last time I checked in with Peter Allegretti, the team was just back from South By Southwest Interactive, an annual music and technology festival held in Austin, Texas. Their time at the festival helped to generate buzz about Dumbstruck, and the venture powering it, Doctored Apps. With that came the interest of investors, but Allegretti has turned down many of them.

“We want to focus on local fundraising” says Allegretti. “Fundraising is time consuming and takes away from the product development.”

Allegretti and the Dumbstruck team realized that they really needed to focus on the product and improving it, so they put those talks on hold to make some big changes (which are coming in June).

“Albany gets a bad rap that it’s hard to raise money here,” Allegretti said. “When we got into this, we thought the money would come from San Francisco, New York City, and London, but then we realized there are significant capital resources here.”

Part of that epiphany came after getting Dumbstruck out of the gestation period, and realizing the team had no intentions of leaving the area. Allegretti credits the spirit of tech valley for the decision to stay. “We like the idea knowing there are resources are here.”

And Allegretti likes the idea of trying to build something in Albany.

A major update to the app is not the only project on the horizon for Dumbstruck — the team is working with agencies that specialize in celebrity management to help push the app.